In a mural the identity of Castelbuono

Riccardo Buonafede’s street art is characterized by messages with social significance. This particular mural is dedicated to the community of Castelbuono, to symbolically mark an important stage in the ongoing local development.

Laid out on the facade of a municipal building, the artwork was bound to start as a portrait, that of a Sicilian man, with his heavy eyes, a flat cap, thick moustache, an unbuttoned collar and a jacket. An older man who has dedicated his entire life to work, just like the farmers of Castelbuono who have devoted themselves to the harvesting of manna. On the same side of the mural, also appearing as a silhouette, different vegetables and an ear of wheat represent products from the Sicilian farmland.

The second part of the mural, the inscription “fraxinus ornus” makes a clear reference to Castelbuono’s profusion of ash trees from which the miraculous manna is collected. The illustration on the right however, shows three typical cheeses, representing local dairy production.

The exotic touch of the illustrations represents the Arabic architectural influence in Sicily. The choice of colors is not accidental either. The warm tones remind us of the soil and the intense blue symbolizes the sea that embraces this island. They are both wishes sent to Castelbuono in hopes that it will continue to safeguard the riches of the region.

Riccardo Buonafede (Comacchio, 1984). His art distinctly focuses on the lights and the shadows that define the shapes, while the eccentric and colored backgrounds move his works away from traditional painting bringing them closer to a pop posterization. In 2018, he was selected by the MArteLive Biennale and awarded by the CON IL SUD Foundation for visual arts competition. 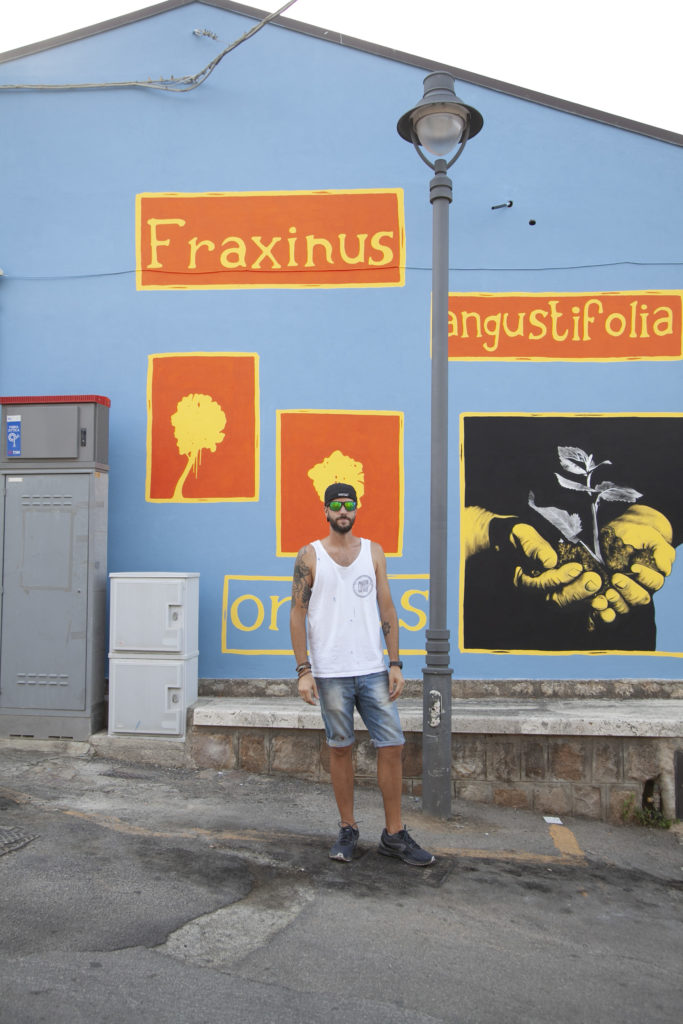 The artist Riccardo Buonafede and his artwork

Other news that may interest you.

Castelbuono, lives up to its name

There is a place in Sicily where a slow-moving but rock-solid revolution is underway. Some years ago, Castelbuono, a small town in the [...]