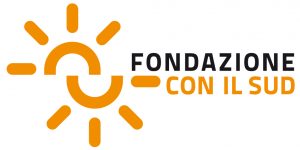 Fondazione CON IL SUD was launched in November 2006 (as “Fondazione per il Sud”), as a result of the alliance between bank foundations and Italian third sector and volunteer organisations; it was created to foster social infrastructure in Southern Italy (so-called “Mezzogiorno”), focusing on building up and qualifying the intangible structures to promote development.
In particular, the Foundation is committed to promote social cohesion paths, enhancing the ideas, energies and skills already existing in the territory: thanks to the resources distributed, these can gather around effective projects and actions, aiming to foster social capital development.

In 2011, the Foundation decided to make clearer its commitment “with” Southern Italy, and changed its name from Fondazione per il Sud (Foundation for the South) to Fondazione CON IL SUD (Foundation with the South).
This vision is actually already in place, demonstrated by the actions promoted by the Foundation and now more clearly communicated also through its own visual identity.

Since 2009, President of Fondazione CON IL SUD is Carlo Borgomeo.